How the Super Bowl ate America 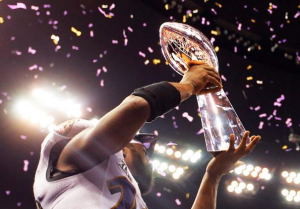 By almost every measure, the Super Bowl is the single most popular sporting event in America today. More than 112 million people tuned in to last year’s game, making it the highest-rated television program of all time….

The National Retail Federation estimates that Americans will spend more than $12 billion on food, drink, game-related merchandise, and electronics — including 7.5 million new televisions — for game day. In all, 1.2 billion chicken wings, 79 million pounds of guacamole, 32 million slices of pizza, and 11.2 million pounds of potato chips will be consumed on Feb. 1, and it will all be washed down with some 50 million cases of beer. As for the aftereffects, antacid sales spike 20 percent the day after the game, and 7 million people call in sick.

I can most assuredly say that I will be one of the 65% of Americans who will NOT be watching this super-hyped television event today. But I will acknowledge that without a doubt it is the ultimate success for commercial advertisers in the country. They spend millions and rake in billions in purchases. To some  the super bowl and even sports in general have an addictive hold that I just can’t begin to understand…