I Am Ashamed Of My Native State… 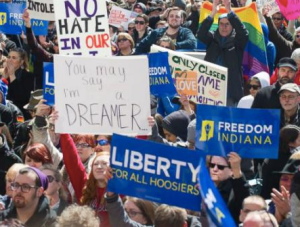 I am ashamed of the State of my birth and where I have lived most of my life. But, this isn’t the first time. Indiana for most of my life has been a very conservative red State who embarrasses me on a regular basis.  The Republicans now have total power and they are wielding it. The latest “religious freedom” law is just one example. It sounds like we are now going to have placards placed on business doors saying which potential customers are not allowed to enter their business.  It reminds me kind of like my youth when I saw signs saying “No Negroes” when we traveled in the south. That embarrassed me even at that young age but at least I could say that didn’t happen in “my” State.

I don’t know how big Salesforce company it but once again Indiana is pushing people out by their actions.

Salesforce CEO Marc Benioff said Wednesday that he is helping employees who are uncomfortable with Indiana’s controversial religious freedom law to transfer out of the state….

“I just got an email on the way to studio from another employee who said, ‘look I don’t feel comfortable living in this state anymore, you have to move me out,’ and I gave him a $50,000 relocation package and said, ‘great, you’re clear to go.’ “

Eli Lilly which practically owns Indianapolis is also stating concerns. I don’t know if Governor Pense and his GOP congress will get the message or not. They just might change the law but that doesn’t mean they will change their attitudes towards those who are different from them.

Maybe I need to consider if I am going to spend my final years in the State of my birth. I know my leaving would not make much of a difference but it might symbolically mean something to me….

Indiana – The Sore Thumb Of The Midwest…

While I am in a political bent here at RJ’s Corner I thought I would tackle one final issue about my home State before I put this putrid topic back on the shelf! I am a Hoosier and in some regards proud of that fact. But when it comes to our politics I am embarrassed to proclaim my birthplace.  I am even more embarrassed when it comes to the politics involved with the health and wellness of many of my fellow Hoosiers.

As shown by the image below Indiana of the last couple of decades at least is a very different place than most of the other States in the Midwest. We stick out like a sore thumb.

By his political actions our governor, who was hand-picked by his party machine predecessor, has chosen to deny thousands of my fellow citizen access to healthcare that would only cost him five cents on the dollar in local taxes. The quality of care for many in Indiana is no better than most of the southern States and that is pretty dismal.  Just so you get the point here is another graphic. Of course you could take all the green and turn it blue and all the grey and turn it red and you would see the typical political condition of our country. 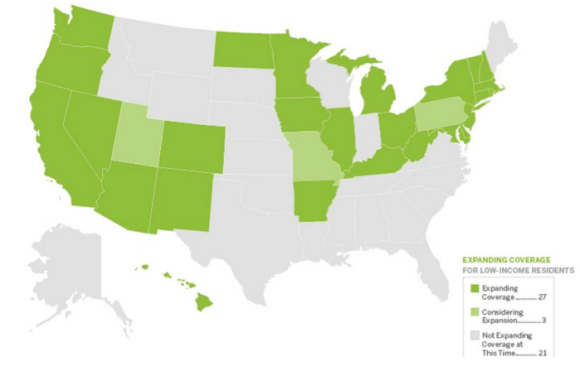 When it comes to caring about the least of our citizens Indiana simply gets an “F”. If you don’t have wealth and its subsequent voting power you are a forgotten person in my State.  It is time to close this can up and put it back on the shelf before it stinks up my entire house.

Back Home Again In Indiana…

I don’t know about where you are at but we are getting ready for a wallapoluzza here in Indiana.  Snow and -15 degree temps following!!  I am hunkering down with my posts-to-write list and a few picture puzzles. Now if my electricity and internet connection don’t go out I am ready.

BTW… The title above is the State song.

Here is hoping that it is better where you are. 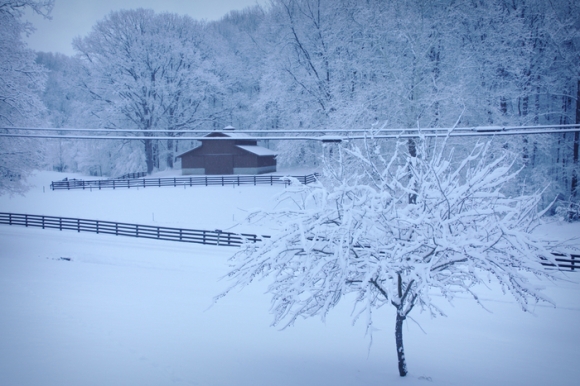 Another snow for us here in Indiana. It seems to have stuck to just about everything.

White Out in Indiana….

We have a white out here at the homestead so I will be hunkering down with a picture puzzle and a keyboard today but not at the same time, I don’t believe in multitasking. 🙂   We knew it was coming but don’t really believe it until we see it.  We are kind of like our Missouri neighbors in that regard.

I stayed late after the Christmas meal at the soup kitchen and shelter yesterday to make food for the guys there through the next few days so they should be ok. My tractor plow is harnessed up and ready to roll once the snow subsides. It looks like we will get about a foot.  We had less than four inches all of last winter.  I hope this isn’t a harbinger of things to come. 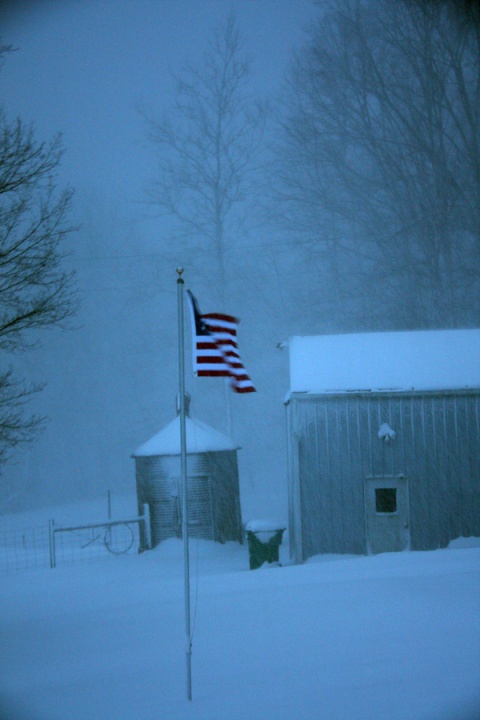 Course there is one thing about economics and money theories, your theory is always right for it’s never tried. -October 15, 1933 Will Rogers 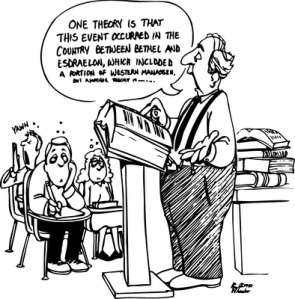 It seems like all the “smart” guys have theories on how to fix our current economic conditions. That is particularly true of all the Republican candidates for president. They all say “When I’m elected president and am going to institute this and solve all our problems….” Of course what always happens is that all their theories are never actually tried so the Republicans keep pulling them out trying to defeat all those pesky Democrats who do the same thing.

I think Newt Gingrich is probably the master of this kind of thing among the current crop. At least he has been doing it the longest. In the early 1990s he made up this elaborate group of theories about how to solve all our wrongs. He called it the “Contract with America”.  His contract got a lot of attention and even managed to get a change in congress to implement it.  The problem was that none of it was really implementable. It was all just theories.

I kind of got caught up in the latest version of these theories ideas. I’m talking about those from Candidate Obama during the 2008 campaign cycle. He said he was all about “change”. I, like so many others, thought the country was in a serious need for change so his words brought a lot of hope for many of us.  Heck, Indiana where I am from even gave him the majority of votes! To see how extreme this was, Indiana has not been in favor of a Democratic president in many years. They are not in favor of a Democratic anything for the most part.

Anyway we all put our hopes that Mr. Obama’s theories would carry the day. How wrong we proved to be. We were naive enough to think that the party that lost the presidency would go along with things that were for the good of the nation even if they were supported by an opponent president.  I know some of you are saying “how could we have perceived such a situation as we are in right now with pure partisanship?”  Maybe we should be saying “how could we not have perceived it”.