I see where the Greeks elected a new government this week to help them reduce austerity that was forced upon them by the European Union bailout.  This reminded me of a book I read a few years ago entitled “Boomerang” by Michael Lewis. One chapter in the book was about Greece. The book is very enlightening and well written. Here are some selected snippets about Greece.

The average government job pays almost three times the average private-sector job. The national railroad has annual revenues of 100 million euros against an annual wage bill of 400 million, plus 300 million euros in other expenses. The average state railroad employee earns 65,000 euros a year….

The Greek public-school system is the site of breathtaking inefficiency: one of the lowest-ranked systems in Europe, it nonetheless employs four times as many teachers per pupil as the highest-ranked, Finland’s. Greeks who send their children to public schools simply assume that they will need to hire private tutors to make sure they actually learn something.

The retirement age for Greek jobs classified as “arduous” is as early as fifty-five for men and fifty for women . As this is also the moment when the state begins to shovel out generous pensions, more than six hundred Greek professions somehow managed to get themselves classified as arduous: hairdressers, radio announcers, waiters, musicians, and on and on and on….

The Greek people never learned to pay their taxes. And they never did because no one is punished. No one has ever been punished. It’s a cavalier offense— like a gentleman not opening a door for a lady.” The scale of Greek tax cheating was at least as incredible as its scope: an estimated two-thirds of Greek doctors reported incomes under 12,000 euros a year— which meant, because incomes below that amount weren’t taxable, that even plastic surgeons making millions a year paid no tax at all….

The problem wasn’t the law there was a law on the books that made it a jailable offense to cheat the government out of more than 150,000 euros but its enforcement. “If the law was enforced,” the tax collector said, “every doctor in Greece would be in jail.” I laughed, and he gave me a stare. “I am completely serious.” One reason no one is ever prosecuted— apart from the fact that prosecution would seem arbitrary, as everyone is doing it and that the Greek courts take up to fifteen years to resolve tax cases.

The quotes above give you an idea as to why Greece might be in the troubles it is. As the book implies actions have consequences and Greece apparently needs to learn that lesson.

Greece is the birthplace of democracy so let’s end this post with a quote from the ancient Greek philosopher Isocrates:

“Democracy destroys itself because it abuses its right to freedom and equality. Because it teaches its citizens to consider audacity as a right, lawlessness as a freedom, abrasive speech as equality, and anarchy as progress.”

Sounds kind of familiar doesn’t it?

We Have The Best Congress Ever…..

“Never blame a legislative body for not doing something. When they do nothing, that don’t hurt anybody. It’s when they do something is when they become dangerous.” – Will Rogers, 22 November 1929

Maybe I am looking at the politics thing all wrong Will? As you say if our congress is doing nothing maybe that is a good thing. Maybe when they do things is when they get in trouble?  I know this is one of  your more popular quotes, but I kind of think you get it wrong in at least a couple of areas.

I am primarily a “power to the people” type person.  I believe that government should stay out of my way as much as possible and let me make my own mistakes and successes. But when the problem is much bigger than I am I need help and that is where government “should” come in. The problem with this idea is to elect people who know the difference.

You didn’t have a lot of confidence in the people in government in your days and I guess I don’t either. Especially the last dozen years or so when the clowns and wing-nuts took over. I’m just not sure that it is the “legislative body” as you say is the problem but instead it is the yahoos who we elect to fill those seats. Currently all the seats seem to be filled with people who are more concerned about themselves and their particular political leanings. There just doesn’t seem to be anyone looking out for good of the country anymore. There are just too many wing-nuts who are clinging to the most extreme views of the world today.

Like you Will, I try to be an optimist.  I think it is possible to push the current ones out and put in more centrist minded folks to take care of our basic needs. It might take a while but I still think it can happen. But one of the necessary prerequisites is that people turn off their favorite cable news channel and look at what is going on with their own eyes and brains.

But I’m just a simple guy so what do I know.

Thank Heavens The U.S. Is Not a Democracy….

Thomas Jefferson said, “A democracy is nothing more than mob rule, where fifty-one percent of the people may take away the rights of the other forty-nine.”

Thomas Jefferson, March 11, 1790: “The republican is the only form of government which is not eternally at open or secret war with the rights of mankind.”

Alexander Hamilton, in debate, said: “Real liberty is neither found in despotism or the extremes of democracy, but in moderate government.”

Alexander Hamilton, in Senate: “It has been observed that a pure democracy, if it were practicable, would be the most perfect government. Experience has proved that no position is more false than this. The ancient democracies, in which the people themselves deliberated, never possessed one feature of good government. Their very character was tyranny: their figure deformity.”

END_OF_DOCUMENT_TOKEN_TO_BE_REPLACED

A Democracy depends on an informed and involved public. If you want to see change it must start at the ballot box……

We elect our Presidents, be they Republican or Democrat, then go home and start daring ’em to make good. – April 1, 1935  Will Rogers

Sometimes I can really get down to that deep thinking. I mean the pure foundational stuff.  I think what Will said above is foundational stuff for a democracy. We elect our presidents and all the other people’s representative and then go home and dare them to get it right!  This worked pretty well for the first two centuries of our existence. There were a few duds during that period but generally the people we elected  at least tried to “make good”.

But something in the process seems to have broken as we entered the 21st century.

To wrap this up it is probably a combination of all of the above. I just hope that we can come back from the edge of the cliff once again but I have my doubts this time around. 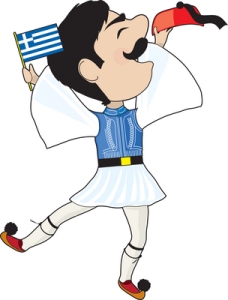 Forming a new government sounds like the perfect solution to our present problems here in the U.S.  I wonder how that would work with our form of democracy? With the partisan divide that currently stifled our bringing some level of prosperity to the other 99% of us we it seems we need a new government, the old one seems totally unrepairable!

Let’s investigate just how forming a new government works. Greece is the epitome of democracy so it must have some democratic (with a small “d” for all my Republican friends) principles behind it?

I know we formed a new government the first time by calling a continental congress in Philadelphia. That definitely wouldn’t work this time around for very obvious reasons.  Here is what the folks as WikiAnswers have to say about this topic.  Some of you, heck maybe most of you, will want to just skip this part 🙂

When can the governed form a new government?

Longer answer: There are several ways a government can be overthrown, some legal within the particular governments framework, some not. First let us look at the republican democracy in the United States.The US constitution provides a few clues. First, the entire House of Representatives comes up for election every two years, it is possible though unlikely that all of the incumbent members fail to get reelected and a new House is formed. What happens more often is some members do not seek reelection, some fail and some succeed, and the composition of the House changes. In the Senate, one third of the members are elected every two years (remember Senators serve a six year term). This causes a more gradual shift in the composition. Dramatic examples of what can happen can be seen the the 2006 elections where the Democrats took control of both houses and thus all committee seats and in the 1994(?) campaign where the opposite occured. The US executive (President and Vice President) are elected every four years and this change can arguably have more impact than the legislative elections. The constitution also provides for impeachment proceedings, which allows the populace to remove the executive, albeit by proxy through the House and Senate.

Many of the democratic nations use the Westminster system of government, wherin the sovereign (if one exists) or other head of state calls for a parliament to convene. The members of parliament are elected by the populace, the party in the majority then get to form the government. If no majority exists a coalition must be formed. This system can see a much higher rate of change as elections are not on a fixed schedule.

Then we have the non-democratic nations. Dictatorships, monarchies, and single-party rule. Peaceful change in these nations is much less likely as the rulers often do not rule with the consent of the governed…. When does it become appropriate for a populace to forcibly change their government? There is no clear cut answer for this, no real benchmark where a person can say “Yep, those are freedomn fighters, not terrorists (or whatever).” … Start out with the Federalist Papers. Ask yourself why did some in the colonial US feel it was appropriate to use arms and violence to establish their own gevernment. Why did others feel that was wrong? Also, read up on the Jeffersonian idea of how the US should be governed, compare that with what Hamilton had to say. and compare both to how it actually turned out.

Getting those yahoos in Washington to give up some of their power and start acting in a more cooperative seems impossible. Power is mainly what drives Washington these days so letting loose of some of it will take a GIANT  GIANT effort. So short of a wholesale removal of all representatives there is not a lot we can do with our republican (little “r” for all my Democrat friends) form of democracy. Maybe its time to shift to a Westminister system? 🙂

It is obvious from all the polls taking place today that a vast majority of our citizens have  no confidence in our current representative. Why can’t we have a “no confidence” vote in our government like so many others seems to have.  We certainly need it, especially now.