I frequently complain about how cold it is here in southern Indiana but I know that further north is gets much colder.  This pic was taken north of Ottawa Canada during a visit there four years ago. I don’t know how long the house has been unoccupied but it shows its age… 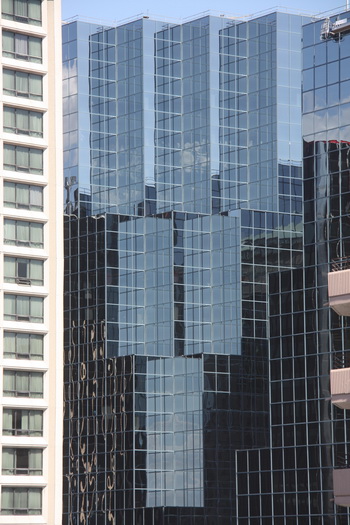 We spent a good bit of today at the National Art Museum here in Canada’s capital Ottawa.  In some ways the building was more impressive than the art it contained. I would say about one-third of the exhibits were for modern art which is really not so much my taste.  I picked out my favorite one in that area and I called it “Big Black”.  It was about a 12 foot square mural of solid black; nothing else!  They seem to have pictures just like that in about every modern art exhibit I have been to.

But they did have a pretty fair amount of wall space dedicated to photography and that was nice.  I  think Yvonne and my collection of 14,000 and growing daily now of photos contains some that deserve to be on those walls too.  Here is one Yvonne just took outside our hotel window.

One of the neat things I haven’t mentioned yet is the combination of old buildings and modern glass buildings found throughout the city. They are pretty much interspersed so it is neat to take pictures of the old ones being reflected off the newer ones. Kind of artsy stuff. We have many such pictures now that I will eventually share on this blog in the future.

After leaving the museum we stopped by the Notre Dame Cathedral and then  took a long leisurely lunch to rest our legs before strolling over to the Byward market. This is a very large outdoor/indoor market of vegetables, flowers and crafts. We picked up some berries for snacking; I am eating some of them now.

This market reminded me of  the one I have been to several times in Guadalajara Mexico. We happened upon the U.S. Embassy while we were in the area; that reminded me that we are in a foreign country even if it doesn’t seem like it at times. 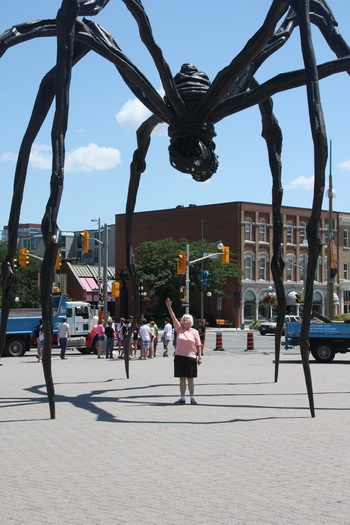 Instead of hiking back to the hotel like we have for the last two days we got lazy and took a taxi back. Since Yvonne is now over seventy there are just so many days where she has four mile hikes in her. Tomorrow we will go to the national experimental farm (or some such name) and then begin heading for the next adventure and that will be Montreal.  We were talking with the waiter in the restaurant last night about trying to decide whether to go to Montreal or Quebec, we decided we only want to do one more big city before heading north-east for the coast.  The waiter said without hesitation that we should see Montreal. He give us several good tips on what to see there.

We will likely spend at least one day in the hinterland between here and there for a little R&R before starting walking tours again.  More on that later. I wanted to throw out at least one more picture here and that is of the big spider outside the national gallery that was about to eat Yvonne. I, being the super hero that I am, saved her just in time. 🙂

And the journey goes on….

On The Road – Day 5 — My Canada Adventure

As expected today was an exciting time. We spent most of the day around the Parliament complex. Here are some pictures of that. We also toured much of the area around the complex and went to the Museum of Currency. It was also a very beautiful day here in Ottawa, sunny and in the 70s. I forgot to take a hat along with me so now I have a sun burned bald head! Gotta remember the hat for tomorrow or I can expect some peeling scalp later in the week.

The brochure provided at the places we visited gave us a somewhat abbreviated history of the country. Of course it parallels that of the U.S. in some regards but is different in others. Where the U.S. had a north/south struggle over the issues of slavery the Canadians had one over language/culture. It was quite some time before they finally resolved that and unified into one Canada. There were a good number of heroes statues around the building and a brief history of each in the brochures.

I think I most admired Lester B. Pearson who was prime minister from 1963 through 1968. He gave Canada a peaceful and compassionate face by his work in helping form the U.N. and bringing universal healthcare and pensions to the nation. I wish we had someone like that to guide us in the U.S. into a more compassionate track. I had hoped that our current president would fit that mold but that doesn’t look to be the case.  Of course another thing about Canada is that even though they are not completely separate from England they still have a great love for the mother country.

I will finish here with a final picture. Of course it is a mandatory one of an RCMP. What trip to Canada would be complete with a picture of an RCMP on his (in this case her) trusty steed. Tomorrow we will be going to the national gallery, the mint, and to the By ward market. More on that later.

Oh, by the way, we did have a very good and properly seasoned dinner tonight so maybe I will have to rescind the previous post 🙂

And the journey goes on.

On The Road – Hello Ottawa….

Last night since we were on the road most of the day we ended up staying at a small motel without internet. It was clean and cheap so I guess I should be grateful and I am. We made the last trek through the pine trees this morning and into Ottawa. My first impression was that there was a lot of traffic for 9:30 on a Wednesday morning.  After that soaked in I started noticing quite a few older building in the downtown area. Since this is the capital of Canada I guess I shouldn’t have been surprised.

We went to the Canada Science and Technology Museum before trying to check into our hotel. They had a lot of neat exhibits there and a wall of fame that had about thirty pictures and related bios there. I recognized a few, but not many, names on that wall. Of course one thing they did invent here was the snowmobile. Here is a picture of one of the first ones. They claim Alexander Graham Bell as their own; I think he was born in Canada but spent most of his life in the U.S.  Anyway the museum proudly presented the accomplishments Canadians have had in the area of science.

After the museum we had OnStar direct us to the hotel.  I got a really good rate at a premium hotel on-line but it proved to be a pretty old hotel without much wireless internet but still has the wired version. Good thing I brought along the laptop. Since we are downtown among all the historic stuff we will be doing most of our touring on foot tomorrow. We will be staying here for a couple of days before heading north. We haven’t decided whether we will go to either Montreal or Quebec, or maybe both, from here. I guess that will be decided tomorrow.

And the journey goes on…

On The Road — Would you like gravy with that?

Here we are at the end of day two of our trek through Canada. Today was another road day for us. We made it from upper Michigan to Sudbury Ontario and are settled down in our hotel for the night.  I don’t know how many miles that is as I had to convert the car to metric when we got here so we would know how fast we were going. Don’t want to get a ticket for speeding. After we arrived we went out for dinner to a place called Hardrock 42. No, it is not one of those HardRock places with the loud blaring music.  Hardrock is what they called the miners in the area years ago. I guess this place was kind of like where they used to eat. They had a lot on the menu including what I chose which was a pulled pork sandwich with Jack Daniel’s sauce and french fries. So, here I am in Canada having sauce made from Tennessee whisky I hardly knew I was out of the U.S.

The waitress who took our orders  was a very nice young girl. After I told her what I wanted she asked me if I wanted gravy with that? I wondered why they would put gravy on a pork sandwich with sauce already on it. She saw my confusion and said the gravy was for the french fries. I decided to go with the flow and try it. After I said yes she commented that you guys must be from the U.S.? She just didn’t understand why we didn’t put gravy on our french fries in our country. After trying it I can say that gravy on french fries is really pretty good; maybe I will ask for in at McDonald’s when I get home.

Tomorrow we keep going on toward Ottawa which is the capital of Canada. We will spend at least a couple of days there before heading towards the St. Lawrence River.

And the journey goes on….