Will Our Gushing Military Spending Ever End?

I know there are many of U.S. citizens who have never known a time when our military spending did not dwarf everything else in our discretionary spending budgets. We just seem to be a nation that wants to be policemen of the world. We want to put our noses into every conflict we can find.  It doesn’t matter that in places like Iraq and Afghanistan they have been having the same battles for hundreds and sometimes thousands of years. We just can’t seem to find a conflict that we think we stay out of or can’t solve with our military might.

Only those of us over the age of forty have ever know a time when our military budgets haven’t dominated everything else. But in reality the vast majority of our over-blown war spending can be attributed to just two presidents, George W. Bush and Ronald Reagan.  here is a little more about this. Check on the source to see the entire article.

Total U.S. defense spending (in inflation-adjusted dollars) has increased so much over the past decade that it has reached levels not seen since World War II, when the United States had 12 million people under arms and waged wars on three continents. Moreover, the U.S. share of global military expenditures has jumped from about one-third to about one-half in this same period….

The ballooning defense budget played a significant role in turning the budget surplus projected a decade ago into a massive deficit that forces the U.S. government to borrow 43 cents of every dollar it spends. As the nation attempts to bring this massive deficit—which chairman of the Joint Chiefs of Staff Michael Mullen calls the greatest threat to our security—under control, leaders from both parties recognize that these unprecedented levels of defense expenditures cannot be maintained.

The question currently facing Congress and President Barack Obama—how much to spend on defense in times of large deficits or in the final years of a war—is not new. Presidents Richard Nixon and Bill Clinton had to identify reasonable levels of defense expenditures as the United States transitioned from war spending to peacetime budgets, while President Ronald Reagan needed to control defense spending in the face of rising deficits. Presidents Dwight Eisenhower and George H.W. Bush confronted both scenarios at once, like President Obama today.

Given that historically we can and have reduced our military spending. It just takes a different point of view to make that happen. I don’t think that the GOP’s combination of inert fear of others and the bravado of getting the bad guys will go away anytime soon but historically we can almost count on that eventually happening again.  The big question as to when, is all about when  we as voters finally realize that we fear way too much and we can’t solve thousand-year old tribal battles on the other side of the world with our million dollar plus smart bombs and drones. It is very possible to drastically reduce our military spending with little or no difference to our security. It just takes more voters at the polls who realize that possibility.

The leaders in the Republican party are constantly complaining that the Democrats are trying to start a class war with all their comments about how the rich are getting a free ride in the U.S.  But what they don’t say is that they are doing what they accuse their opponents of but in a different area.  They are constantly trying to incite voters against the older generations saying that we have gobbled up all the resources and left the debt to others.

I hear comments on this blog and in almost daily news articles that seniors are gobbling up the healthcare dollars on themselves and there is very little left for others. That is simply pitting one group of citizens against another. In reality the U.S., if we follow the examples of the rest of the developed world, should be easily able to provide quality healthcare for all its citizens. There is no need to say if one group has healthcare then another can’t have it.  Beside being untrue it is very obnoxious.

But this is not the only place where my conservative friends seem to lack compassion. Their current budget that just passed the house reneges on the promise of 10% pentagon cuts because of the super committee’s failure to come to any agreements. Instead their budget shows no decease in military spending. They want to get the deficit under control by cutting spending on things like feeding poor kids a free breakfast so they can have at least one nourishing meal a day.  They want to cut spending on HeadStart which provides pre-school opportunities to kids of single parents below the poverty scale.  They want to cut food stamps to the poorest of the poor.

I simply cannot understand the process my conservative friends go through to justify these cuts in place of keeping their promise to reduce our extremely bloated military budgets. It is beyond my beliefs. If anything their budgets should justifiably incite a class warfare in this country. It seems the compassion for anything besides the super-rich and the military contractors is quickly disappearing from the Republican party and that is very depressing to me. I dream of the day when the voters will finally say “enough is enough” but I just don’t see that day coming anytime soon….

The ‘Gang of Six’ At It Again…

Warner and his colleagues in the Gang of Six are putting the debt-reducing plan produced by the Simpson-Bowles commission into legislative language (some 800 pages and counting, by Warner’s estimate). That legislation should be in final form within the next six to eight weeks, Warner said. The bipartisan commission, chartered by President Obama, offered a widely commended path to financial balance but has yet to be actually put down in legislative form.

In addition, Warner plans to spend some of his congressional recesses taking trips around the country, alongside Republican colleagues, to talk up the case for a big debt-reduction plan.

It seems that the Senate of old, meaning when compromise actually happened and addressed the needs of the people, has been reduced from one hundred down to six. That seems to be all that is left after the  partisan bombs have cleared the landscapes.

One of the reasons that this compromise might actually be accomplished is the deadly fear of some that the pentagon budget might actually be cut ten percent if they don’t. The Pentagon has already blatantly stated that they won’t even consider such a reduction in their budgets. If the senate takes the Pentagon at their word then some type of compromise is going to have to happen. It seems almost impossible for these guys to sa “no” to the generals for any reason.

Wouldn’t it be nice to finally get back to something constructive in our political processes. But in reality I personally will be cheering for the 10% war budget cuts. I would like to see that as the beginning of many reductions in this area. If we keep at it maybe we can come to some parity with the rest of the world on military matters before the end of this century. Then we can finally start using our money for helping the citizens of this country. 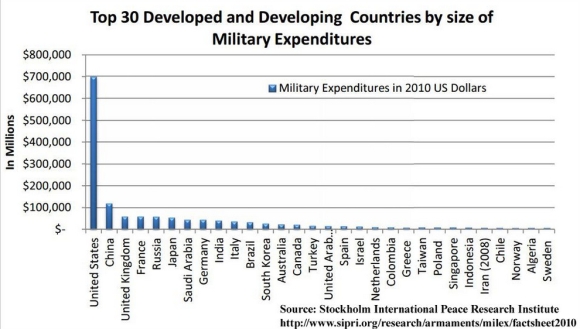 Here is a rather straight forward graph showing military spending by country. Are you like me and see a very basic problem here? If we look at is per citizen it is even more skewed.

No wonder our budgets are in so much trouble. No wonder the world always comes to us to solve their problems. We are taking on massive debt to be the policemen of the world. When will it end????

Some Good News on the War Front…

Good news! For the first time, the Senate has approved legislation calling for an end to the U.S. war in Afghanistan and your support was a big factor in this success. Last week, the Senate added the amendment, offered by Democratic Senator Jeff Merkley (OR) and Republican Senator Mike Lee (UT), to the military authorization bill.

The near-unanimous approval of this amendment shows the significant and growing dissatisfaction with the war in Congress and the power of your action.

I got this from an email from the FCNL a few days ago. It seems like the cost of our endless wars in terms of our time, money, and especially our young people’s lives is starting to sink in with some members of Congress. I pray that the power mongers in Congress do not stifle this new-found awareness among its members.

What Could We Do with $1 Trillion Dollars???

That is a question being address by a group of young people who descended on Capital Hill challenging lawmakers to address the bloated defense spending that imperils their schools, communities, and futures.

American Friends Service Committee (A Quaker organization) is proud to be associated with this group of young people.  See the article about these young people at http://afsc.org/story/1-trillion-contest-winners-visit-capitol-hill

The basic question being asked is what could we have done with the money we spent on the Iraq and Afghanistan wars?  As a result of all this spending many in the U.S. congress today are stripping aid to towns and cities and also agencies that give at least a small safety net to those who have fallen on desperate times.

The following are words in a petition currently being sent to our Washington representative. If you are interested in supporting this petition click this link: http://afsc.org

We spend forty time more per citizen on our military complex than any other country on this earth. It is unbelievable that we would continue to support this bloated condition by stripping the safety net from the least of our citizens and putting the debt associated with this condition on our children and grandchildren.

Someone has to stand up to this totally absurd condition…

But what do I know.