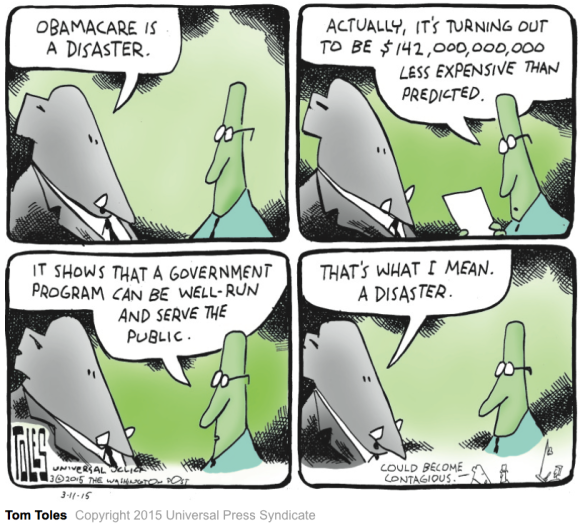 Those GOP yahoos have tried 50+ times to repeal it. I kinda of think it is just too late for that.  They will have to put it along side Social Security, Medicare, Medicaid as one of the”socialist” things to eliminate in the future. That is if they ever have a friend in the White House again.

Cutting Out the Middle Man…. 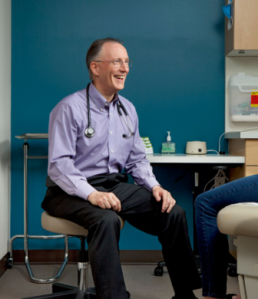 Concierge care was originally conceived before Obamacare, and it revved up in response to the Great Recession as an escape hatch for doctors fleeing the status quo. The existing fee-for-service system pays caregivers a certain amount for each test, diagnosis and procedure–which, according to critics, encourages overtreatment instead of preventive wellness care. Qliance, along with a growing number of similar operations, aims to be more than an escape. It seeks to be the answer to the quest of health care reformers: healthier patients at a lower cost. Fix the way primary-care doctors are paid, the Blisses argue, and we can cut unneeded tests, premature procedures and excessive ER visits.

The driving insight here is that primary care and specialized care have two very different missions. Americans need more of the first so they’ll need less of the second. And each requires a different business model. Primary care should be paid for directly, because that’s the easiest and most efficient way to purchase a service that everyone should be buying and using.

SOURCE: Medicine Is About to Get Personal | TIME.

I don’t think I am the only person who believes that insurance companies stand between me and my doctor and tell us both how we will do business together. Of course that business is keeping me healthy, or at least as healthy as I can be given my circumstances. The above article is several thousand words long so it was difficult to pick just a few of the words to illustrate the change but I tried to compress it here.

Doctors are leaving primary-care practices in droves. They don’t like being told that they can only spend 11 minutes with a patient and that a major part of their practice is geared toward a massive amount of paperwork to the insurance company to justify what they are doing.  The solution to this problem is to cut out the middleman. That is to remove the insurance company from this interaction. That seems to be just what Dr. Bliss has successfully done with over 35,000 patients in the State of Washington. Instead of paying an insurance premium you pay a monthly fee directly to your doctor and he can then significantly cut his costs and spend whatever time is necessary with each patient.  As a result his patients only need to buy a much less expensive hospital and speciality doctor insurance policy.   It is a win-win situation for both the doctor and the patient.

We definitely need something to change in our current U.S. healthcare industry and this might be that accomplishable change. It would be great if we could finally get into a single payer system much like the rest of the world does and how we in Medicare are currently getting our healthcare needs. But until that time comes cutting out the middleman seems to make a lot of sense.  If you are interested in this sort of thing I would advise you to click on the source above to get more details. 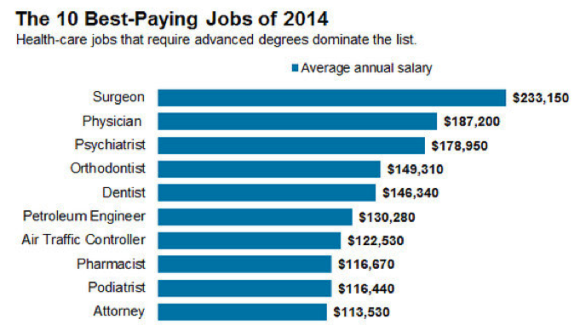 Nearly all of 2014’s best-paying jobs require an advanced degree, according to a new ranking from the job portal Careercast.com. Seven of the 10 most lucrative positions are in the health-care industry.

It is interesting to see that seven of the ten highest paying jobs are in our unsustainable healthcare sector. I doubt that this relation is coincidental. Note that the numbers above are the average. Many make much more than this. We seem to always knock the lawyers but they are pretty far down on the list. The guy dispensing your prescriptions at your local pharmacy like makes more than the guy who might one day defend you in court. 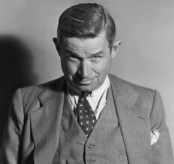 “In schools they have what they call intelligence tests. Well if nations held ’em I don’t believe we would be what you would call a favorite to win.” – Will Rogers, 25 June 1935

I don’t think we would eithter Will.  We would probably be about the same as where we are with our crazy healthcare system. Near the bottom of those that have schools  and hospitals anyway. But there are a few of us who are darn smart and maybe they make up for all the dunces among us…

US continues its losing streak in health care quality comparison 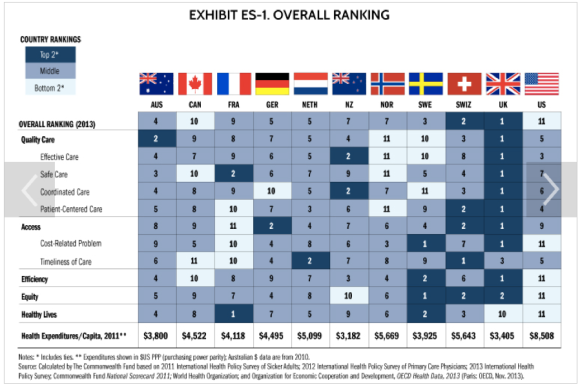 The U.S. spends the most of any country on its health care system, and yet it ranked the lowest out of 11 industrialized nations in overall healthcare quality, according to a report published Monday by the Commonwealth Fund.The report, which covered the years 2011-2013, compared more than 80 indicators of U.S. health care spending, quality and performance to the likes of Australia, the United Kingdom, France, Canada, Germany, New Zealand, and Sweden, among other developed nations. The UK, which was ranked highest, blew the U.S. out of the water, despite the fact that the country spends less than half as much on health care per capita $3,406 on average, compared to $8,508 in the U.S.. The U.S. also spends the most on health care as a percentage of GDP 17% than any other nation.

I am about to finish one of the six or so  books I read at the same time; this one about the culture of the United States. It shows numerous places where we are the most creative people on earth. But then comes our ideas of healthcare. We just can’t seem to understand that our current system of taking care of our citizens is a loser and a big waste of money by almost all standards. We spend twice as much as anyone but get so little for our dollars.

It seems idiotic but it seems we are opposed to doing what has proven to work. Why,  because much of the rest of the world already has it figured out and therefore the solution would not be an “American idea”? We need to get over the idea of shunning anything not invented here and simply go with what works. We need to be as much pragmatists as we at least used to be inventive.

We need to get over the idea that somehow anything socialist is un-American.  We presently allow our government to handle our healthcare needs for about half of us but going all the way seems to be a big problem. Perhaps the most socialist healthcare system in the world is from Britain and of course from the above graphic we learn that they also provide the best care by most standards.

A person working sixty hours a week at a minimum wage job will earn about $21,000.  But according to the above they would likely spend about half that amount just for their family’s health insurance! I know I seem to harp on this topic often and that is because it is an obvious solution that is for some reason vastly ignored by so many of us. We need to take a big bite out of the humility apple and learn what the rest of the world can teach us.

On top of that, higher-income taxpayers could see their itemized deductions and personal exemptions phased out and pay higher capital gains taxes — 20 percent for some taxpayers. And there are new taxes for them to help pay for health care reform.

There are different income thresholds for each of these new taxes.

An additional 0.9 percent Medicare tax, for example, kicks in on earnings over $250,000 for married couples filing jointly and $200,000 for singles and heads of household. Same for a 3.8 percent tax on investment income.

But the phase-out of personal exemptions and deductions doesn’t begin until $300,000 for married couples filing jointly and $250,000 for singles.

Taxpayers will still be able to deduct their medical expenses, but it will be more difficult for many to qualify. The threshold for deducting medical expenses now stands at 10 percent of adjusted gross income, up from 7.5 percent. There’s an exception, though, for those older than 65. For them, the old rate is grandfathered in until 2017.

It is good to hear that at least some things are changing when it comes to asking the wealthy to pony up a little more of their mammoth discretionary income for the good of the country and for the basic welfare of its citizens. While these gains (you probably say loses if you are on the receiving end) are notable they is still a long way to go in this area…