WASHINGTON — It’s entirely up to House Speaker John Boehner (R-Ohio) whether 2.6 million unemployed Americans get their benefits back, at least according to the two senators most involved in legislation to restore the compensation.

It troubles me that so much power is being concentrated in so few people. When one person can decide whether millions will fall through the safety net. But something else troubles me even more.

What happens when a substantial majority of U.S. citizens no longer have any empathy for others in our society?  It is pretty much a fact that about 25% of us want to eliminate help for those who need it. Some say they are ripping apart the safety net to rescue those caught in it. Some say outright that they just don’t want to have to pay the taxes necessary to be their brother’s keeper. Some have absolutely no sense of community or the common good. They are just too busy looking out for themselves to see any good from helping a neighbor. And then there are some who flat out don’t want government in any form to intrude into their lives.

What happens when these groups become a majority in the country? The primary motivation for all of the above things is greed. They just don’t want anyone taking things from them that they consider theirs alone. Another part of this trend is driven by fear. Fear is such a strong motivator in our society today. We fear that there won’t be enough for all of us so we want to make sure we are the ones who survive. I try to be an optimist and think that eventually the pendulum will swing back in a more balanced direction and that somehow we will quit views those who disagree with us in any manner as our enemy.

I hope we have learned our lesson about putting too much power in the hands of a few people. Hitler is the most recent example of this but by no means the only one. When a small handful of politicians can control what all of us do we are in trouble of losing our democracy.  In order to prevent that from getting worse than it is now we all most realize that “we the people” inevitably have the power and not the politicians. We must take our right to vote with the utmost seriousness or it just maybe eventually stripped from us.

I wish President Bush and many of those presidents before him had taken the words of Jefferson to heart before they did many of the things they did.  I know it is against basic human nature to not utilize the power you control. Just look at all those yahoos in congress to see an example of abused power.

I have read quite extensively on Jefferson so I know the words above were at the heart of his nature.

OOPS –  I guess I was in too much a hurry to get this weekend quote out and forgot to add the quote!!!   Sorry about that.  Can’t find it now. But isn’t that a nice life size bronze of Jefferson at the visitors center outside Monticello. 🙂

Looking Into The Future….. 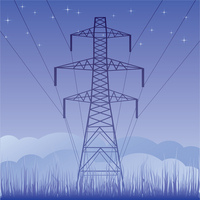 Africa is finally starting to come into the 20th century. I know it is a century late but better late than never.  Electricity, telecommunications, and TV are becoming more common  in some of the more agrarian countries.  They are doing that without a grid network as is common in most industrialized countries today.  Solar panels, cellular communications and satellite dishes are the means of this progress.

I know that for many today it is impossible to remember that rural areas in the U.S. were without electricity for years after it was available in urban areas. The reason for that was the expense of putting the power grid in remote areas.  It took FDR’s New Deal along with the REMC (rural electric membership cooperative) to make it happen. For the same reason telephones were late in coming to hinterland too.  And believe it or not most rural areas still have nothing but a dial-up internet connection that is about twenty-times slower than what you get in most urban areas.

Let’s face it, it takes a lot of money to build our current day grids that supply us with so much of what it means to be in the 21st century.  The grid is not a static thing; it needs to be constantly upgraded in order to keep up with demand.  More and more electrical power stations are needed. More and faster internet connections mean moving from copper to fiber-optic lines. Satellites are almost constantly being launched to keep up with our insatiable demand for more and more information.

Looking into the future I see the African model as being the most efficient one for the 21st century. No longer will our homes be connected to power stations requiring a huge infrastructure of wires and power sources. Even today we have the technology to take our homes “off-the-grid”. Solar and wind power will be the energy source for the middle 21st century house.  No more nuclear power plant with possible devastating failures. No more acid rain and CO2 because of coal-burning.

Land based telephone lines are becoming rarer and rarer as each year passes. It won’t be long before the telephone pole will also be a thing of the past.  Cables run throughout our communities to provide us with internet connections and TV will be replaced by Satellite dishes that will be so small as to not even be noticed on our houses.

Africa is showing us that we can live off-the-grid in the 21st century. Can you imagine a city without all the wires strung throughout? Can you imagine never having to be without electricity during blizzards because of broken power lines?  It does seem ironic that the most backwards continent on the earth is likely showing us the future but I believe that to be the case.

Now that you have heard my arguments my opening statement doesn’t seem so absurd after all does it? 🙂

Vanity is a powerful force in us human beings. We all like to think that we are great in one aspect or another. After all, none of us want to go through life thinking we have not made at least a small dent in this world.  Some are humble about their greatness. Gandhi and Mother Teresa immediately come to mind in that category. But for every humble person there are thousands who think they are greater than they are.

Thinking you are great when you aren’t is something that seems epidemic in Washington DC. It must be something in the water that creates that illusion.  Anybody that has done any studying of our current political scene knows that 99.9% of what goes on there is about power and self-preceived greatness. I swear I just can’t understand how the Capital Building can even accommodate all those inflated egos without exploding.

But lets not limit inflated egos to the beltway. They are also massively prevalent in some of the more affluent parts of our society.  Any guy who managed to find a niche that allowed him to make some money thinks the rest of us are idiots.  Some of these folks believe because they made a few bucks  that they are now great and can rule over the rest of us with their greatness. They tell their employees how they want them to vote. They keep wages low so that they can brag about all their ever accumulating wealth. They just love being a big fish, even in a small pond.

Thinking that you are great is something that all of us, me included, need to get over.  God, who is the ultimate judge of greatness,  loves that little baby who just died in Africa due to malnutrition just as much as any of the rest of us. When we thoroughly understand that then we just might able to achieve some small level of greatness.

Thanks Will for your words of wisdom….

Here is another poll that shows when it comes to making cuts in Medicare or Social Security a big percentage of people think we should cut our bloated defense spending instead.  If we could somehow manage to get our war machine budgets in line with the rest of the world, yes I mean the other 95% of the world, then most of our budget and deficit problems would be almost immediately solved.

Why don’t the politicians listen to us? I’m sure the answer like always is mainly politics and power struggles. God didn’t rule that somehow we are supposed to be the policemen of the world. When we get that into our heads we will be on their way to prosperity again. Let’s give some of that responsibility back to the rest of the world. We just can’t afford it anymore if we ever really could in the first place.

But what do I know……

A Point of Perspective….

Killing someone without government permission is wrong!!

I guess it is just a matter of how you look at things in the world. I ran across the statement above recently and was dumbstruck by it. But after thinking of it a while I realized that from a military and a capital punishment perspective this is how we justify killing the “bad guys”. If the State says its ok to kill then you are justified in doing it! This has to be the primary mentality that allows a military sniper, which by the way is the fastest growing sector of our military,  to blow someone’s head off their shoulder from a mile away and not have a guilty conscience. They have no idea as to why he is doing it!  They are just blindly taking orders. “My government told me to do it so it must be alright.”

It is pretty clear to me that God did not give our civil government, or any worldly body for that matter, such broad power to say when I should live and when I should die. That power of life including its creation and demise and everything in between resides solely in God’s hands.  I know there are a handful of quotes, mainly from the Old Testament, that some interpret as giving life and death decisions to the State. To me those are simply rationalizations for doing something someone already wants to do. I am convinced that the overwhelming words, especially those of Jesus in the new covenant, ameliorate these misinterpreted few instances.

Some people say “God told me to kill.”  “God told me to do it”  This kind of justification has happened many time throughout our history starting with the Holy Wars and continuing in each generation including recently where President Bush said God told him to invade Iraq which resulted in more than 100,000 deaths. They say things like “God is on our side so therefore it is alright to kill the person who sees things differently than I do”.